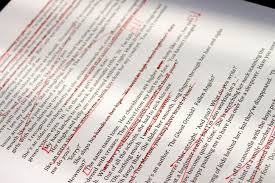 The manila envelope containing my first critique is still in my dented file drawer as a memorial to how delusional I was back then . . . I mean how far I’ve come as a writer. I pre-submitted the story before my first writer’s conference. If I remember correctly, I requested Christine because that sounded like a nice name.

I’d just had my first article accepted by a magazine, so I hoped my status as a published author showed, but mostly I prayed the story wouldn’t become fodder for jokes among the faculty. Since we were allowed to send more than one manuscript, I also submitted a personal experience piece to a magazine that I had never read, researched, or even heard of. Obviously, I had a lot to learn.

I picked up my manuscripts on Saturday afternoon and found a quiet corner, hoping this wouldn’t become a moment when I got caught feeling “discouraged.” We’d received detailed instructions on what to do when that happened, but I was determined to prove my ability to take criticism like a big girl.

I can still see the smiley faces, stickers, and Good job scrawled in giant print across the pages of Christine’s critique. The story was way too long and full of marks noting passive voice and grammatical errors, but Christine gave me valuable pointers and encouraged me to show it to the editor of a Sunday school take-home paper for teens. The editor liked my writing and told me to start submitting stories to her, so I walked away thrilled. I sent her a story a few months later, and she accepted it.

I have been writing for that magazine ever since. In fact, they eventually accepted the story that Christine critiqued, after I applied her suggestions, learned to write better, and spotted the appropriate topic on their quarterly theme list.

So, you might be wondering, what happened to that random submission to the magazine I knew nothing about? Sadly, they turned it down. (I know, how shocking.) But Christine’s critique softened the blow, so I requested a critique on that one as well. Someone else, who didn’t use quite as many smiley faces, reviewed it. She didn’t suggest I show it to an editor. I believe that story is in my “Cursed be the one who opens this” file. Either that or I threw it away. It was really bad. You know what though? Getting it critiqued helped me see that. I wish I had gone that route before inflicting it on an editor.

These manuscripts stand as reminders of the value of the critique process. Whether a story comes back with smiley faces or so many red marks that we can hardly read the original type, it is an opportunity to see what we are doing well, what we need to work on, and which stories need to stay in the file drawer, at least for a while.

What have you learned from critiques?